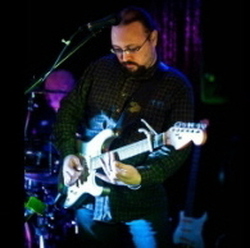 Joe Poirier is a guitarist / singer / songwriter / teacher who originally hails from Cape Breton Island and now resides in Toronto.  While growing up with a heavy dosage of Cape Breton Fiddle music, Joe stumbled upon 50’s Rock ‘n’ Roll music through his parents.  His father, an accomplished fiddle player himself, introduced Joe to whatever instruments that were around the household.  By age 12, he settled on the guitar and started learning some of the Rock ‘n’ Roll music he enjoyed, which led him to the discovery of Blues music.  A musical true love that still goes on to this day.

After high school, Joe wanted to study music more seriously and enrolled at St. Francis Xavier University where he graduated from the Jazz Program.  With a degree in hand, Joe decided to pursue a career as a musician.  At this point Joe took whatever opportunity came his way and performed in a variety of bands playing Country, Rock, Celtic, Jazz, or Folk.

In 1998, Joe got a call from an old band mate from his university years, Ray Mattie (from the band Pogey), who persuaded him to move to Barrie, Ontario to play East Coast music.  For about 2 years the two performed together under the name Tidal Wave.  While in Barrie, Joe continued playing with whoever he could, developing his guitar stylings while beginning to step up to the mic to sing.  Soon Joe would be known as an aggressive, energetic and enthusiastic guitarist dedicated to entertain anyone who was willing to listen.

In 2001, Joe recorded his first album with Steve Henry on bass and Ron Hill on drums (both from Orillia, Ontario).
The CD entitled Help Me Stand, featured ten songs with six original compositions written or co-written by Joe.

In 2002, Joe made his move to Toronto.  Even though he was living in Canada’s largest city, he made his living on the road playing guitar, bass, mandolin or even violin across North America with any group that would call him.  After a few years on the road, Joe wanted to get back to playing his brand of ass-kicking, name taking Blues-Rock that he was born to play.  So he started venturing out in the city as he did before in Barrie.

﻿In 2011, Joe released two new recordings to spotlight many of his musical tastes while still leaning on the Blues which is his true musical passion.  The first, Good Times, as its title suggests, is an album of uptempo numbers showcasing several Blues styles.  The second, Sunshine, aims its spotlight on his talent as a songwriter as well as a guitarist whose heart is clearly in the vein of such legends as Stevie Ray Vaughan, Jimi Hendrix and other great Blues-Rock performers of the past.

To check out some of Joe's original material please visit: www.joepoirier.com﻿ 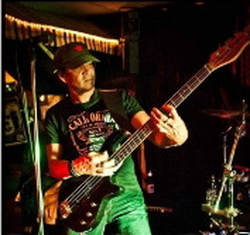 Gary Sharma’s musical career started at the young age of thirteen. He would resort to picking apples to earn money to buy his first guitar, an acoustic. Shortly thereafter, he purchased a Gibson SG. At the age of fifteen, he picked up a bass and fell in love with the stringed instrument. He was a natural and since then has made a name for himself within musical circles being an incredible bassist and vocalist.

Gary has had the honour of playing with such legendary artists as Greg Godovitz, Alan Frew, Tony Springer and Mike Dankert. He also enjoys freelancing, and has worked with many bands over the years, including Metalhead, Full Tilt, Lisa Carr and The Backseat Drivers to name a few. 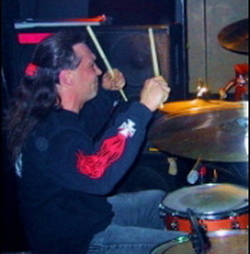 From the early beginnings of banging pots and pans while singing to Beatles albums, Toronto native Dean Nichols has spent the last forty years carrying the beat in bands and travelling around the world.   Citing Buddy Rich, Keith Moon and John Bonham as his main influences, Dean has accomplished more in his career than some only dream of doing. Bands like The Who, Led Zeppelin, Allman Brothers, The Eagles, to name a few, have been prominent figures influencing Dean’s musical stylings.

Since his first rock and blues band, ‘Electra Glide’, in 1982, Dean has performed with numerous musicians. Not limiting himself to just rock and roll, Dean has found himself in many diverse bands.  Throughout the 80s, Dean continued to hone his craft. Whether it was rock, country, jazz, even blues, it wouldn’t be until 1991, with Rick Spyder, that he found himself playing extensively across Canada, the United States, and even a one month contract performing in the US Virgin Islands.

‘Atomic Tomb’ (1994-2014), would record two cds and find themselves opening for such fellow Canadian heavy weights like Helix, Killer Dwarfs, Lee Aaron and Testament. During this time, in 1995, he teamed up with Russ and Daryl Dwarf to pay tribute to Bon Scott in ‘Autobahn’. They would perform throughout 2000.

Switching gears a bit, in 2000, Dean found himself in a rock-punk outfit called ‘Raw Dog’, where he replaced Johnny Blitz (formerly the drummer of Cleveland’s ‘The Dead Boys’). He would continue with the rock, punk genre by joining ‘Raving Mojos’ in 2004. ‘Raving Mojos’ employed guitarist Kurt Schefter (Alannah Myles) and vocalist Blair Martin (Teenage Head).

During 2007-2008, Dean toured France, Germany, Holland and Spain with German rock band ‘Hellion’. They would open for various acts at the many festivals overseas.  Teaming up with Reckless guitarist, Steve Madden in 2009, in ‘Prime Rockers’. Then also in 2009 throughout 2013, Dean played in ‘Rock Gods’ with Moxy’s Earl Johnson.  Since returning from Germany, Dean has worked as a freelance drummer and vocalist for various bands throughout the Greater Toronto Area.